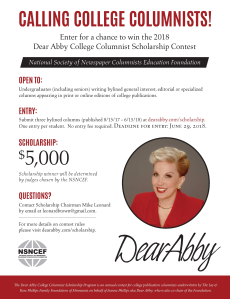 BLOOMINGTON, Indiana (January 31, 2018) — The National Society of Newspaper Columnists Education Foundation (NSNCEF) is accepting applications for the 2018 Dear Abby College Columnist Scholarship Contest. The contest is open to undergraduates who write bylined general interest, editorial page, or specialized columns that appear in the print or online editions of their college publications.

A panel of judges appointed by the NSNCEF will choose one sole winner in 2018 who will be awarded a scholarship of $5,000. The 2018 winner will be announced in August.

Eligibility, submission guidelines, and the application form are available at dearabby.com/scholarship. The deadline for submissions is June 29, 2018.

The Dear Abby College Columnist Scholarship Program is an annual contest for college publication columnists provided by the NSNCEF and is underwritten by The Jay & Rose Phillips Family Foundation of Minnesota on behalf of Jeanne Phillips aka Dear Abby, who is also co-chair of the Foundation.

Dear Abby is written by Abigail Van Buren, also known as Jeanne Phillips, whose career as an advice columnist began at age 14. As she helped her mother answer incoming letters from advice-seeking teens, Phillips discovered that she truly loved the work. She wrote for the column behind the scenes until December 2000, when Pauline Phillips recognized Jeanne Phillips as co-creator of Dear Abby and officially retired.

With a worldwide readership of more than 110 million, Dear Abby has a devoted following who wouldn’t dream of starting each day without her. The most widely syndicated columnist in the world and a true household name, Dear Abby is well known for sound, compassionate advice, delivered with the straightforward style of a good friend.

Phillips is one of the few laypersons to be granted a prestigious Life Consultant membership in the Group for the Advancement of Psychiatry (GAP), an organization of nationally respected psychiatrists dedicated to shaping psychiatric thinking, public programs, and clinical practice in mental health. In addition, Phillips sat on the board of judges for the Talbots Charitable Foundation Women’s Scholarship Fund, as well as the advisory boards of the National Alzheimer’s Association, the Children’s Rights Council, Mothers Against Drunk Driving and the National Kidney Foundation.

She has received awards from the National Office of Drug Policy, the American Academy of Dermatology for excellence in public education of dermatology issues, American Ex- Prisoners of War, Overeaters Anonymous and the National Minority Organ Tissue Transplant Education Program. She is the recipient of the 2015 Proxmire Award for leadership in public awareness of Alzheimer’s disease and dementia, and the Hearing Loss Association of America’s 2015 Walter T. Ridder Award. In 2007, Parents, Families, and Friends of Lesbians and Gays (PFLAG) honored Phillips with the first Straight for Equality Award for her support of LGBT equality.

This site uses Akismet to reduce spam. Learn how your comment data is processed.